The 2016 free agency frenzy has died to a slow murmur now. General Manger Howie Roseman has rid the team of practically everyone brought in from the Chip Kelly era. After reading news reports from NFL Network, Kelly took shots at Roseman, saying that the RB DeMarco Murray and CB Byron Maxwell deals were Roseman’s idea, and not his. This is almost exactly what you’d expect from one who has just been fired from a job. Boy, Coach Kelly….those grapes sure are sour, aren’t they?

In Roseman’s dealings,  he managed to trade up in the first round of this year’s draft from the No. 13 overall pick to No. 8. It cost the team CB Maxwell and LB Kiko Alonso, but so what? The purge was on, and as Eagles fans, we all knew it would happen. The Dolphins now have two starters out of the deal. The Eagles? They are in a prime position to either draft a top tier player, or if it doesn’t fall to them a certain way, trade down and reap the benefits.

The Cowboys recent signing of former Redskins RB Alfred Morris would suggest that they aren’t in the market for a running back. I still like them to take Carson Wentz, if he’s available at No. 4. The Titans now have their running back so the only teams that might pick running back ahead of the Eagles would be the 49ers or Ravens. Assuming he’s available at No. 8, Ohio State RB Ezekiel Elliott would look great in midnight green next year.

I recently spoke with the Big 10 Network’s Howard Griffith about the running back prospect. Griffith is an 11-year veteran of the NFL, and was part of the Broncos’ Super Bowl wins in 1998 and 1999. I asked Griffith what he sees in Elliott that would make him be able to transition successfully to the pro level. Griffith said:

Elliott is a complete back. His ability to play without the football is one of the things that jumped out at me when I watch him on film. 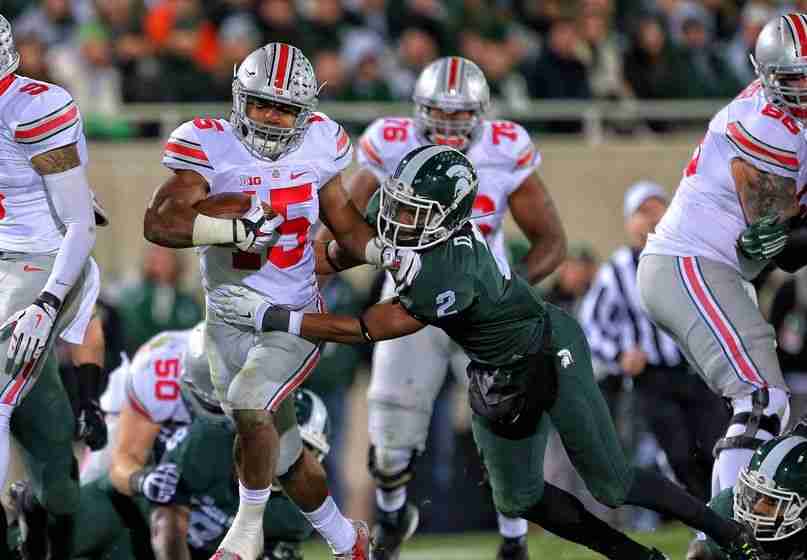 I only had to look at the Ohio State-Michigan State game from this past season to see that on numerous plays that just the presence of Elliott on the field caused Michigan to alter their defensive strategy, leaving an inside linebacker and a cornerback in a short zone coverage. It left gaping holes in the defense that Ohio State took advantage of all day. There was another instance in a game against Penn State, where a defender came free, coming towards the Ohio State QB JT Barrett. Elliott picked his spot to make the block, waited until the defender had raised his arm on his swim move, and then he struck. He lated went on to say that he called that a “sauce block” because he was adding a little extra sauce to the defender’s ribs.

Griffith also went on to say:

Elliott will be a Day One starter in the NFL because of the way he approaches the game in the classroom and how he carries that to the field.

High praise for someone that used to block for Terrell Davis.

I watched a long film session with a former college football linebacker, just to get the feel of what a defender is thinking when he sees Elliott. In the Florida A&M game, he pointed out the way that Elliott was the one that initiated the contact, and didn’t wait for the defense to make the hit. He says that that kind of style from a running back can make for a long day for a defender trying to catch him. In the season opener against Virginia Tech, this guy told me to look at the play Elliott broke for an 80-yard touchdown in the first quarter.

He said the way he sees how the play unfolds before it even happens gives him the ability to be at the spot where the hole is going to be. It gives Elliott the advantage because the defense has so little time to react. Elliott’s ability to plant his foot and cut was also pointed out to me by this former player. He would stop and rewind certain plays, almost like John Madden would do, just to see Elliott be able to cut. On the long touchdown, when Elliott was in full stride, two of his strides would cover just over five yards. It wasn’t as if he was struggling to get up to speed, or looking like he was nursing a hamstring. Elliott was lithe in the open field, something that has been a bit lacking in the Eagles backfield. LeSean McCoy had it, but thanks to Chip Kelly, that is no longer an option.

Thanks to Howard Griffith, and Jerryan Parks-Harris from Arkansas-Pine Bluff, I was able to see things on film I might not normally have noticed about Elliott. In Chase Daniel’s meet and greet with the Philadelphia press, he mentioned New Orleans QB Drew Brees showing him what it meant to be an NFL quarterback, starting in the classroom. If Griffith’s assessment is correct and the Eagles can land Elliott at No. 8, it could certainly provide just the jumpstart the Eagles ground game needs.

If you haven’t noticed, I am counting down the days until the NFL Draft. It’s as if I’m 10 again, waiting on Christmas Day!