Tuesday, January 31st, 2023
THE LATEST
Home Eagles The Eagles’ 7-0 Start Should Not Be Reduced to Just Having an Easy Schedule

After a 35-13 demolishing of the lowly Pittsburgh Steelers to send the Eagles to 7-0, the talks of the Eagles having an easy schedule have resurfaced. After every win, it’s always the same thing being said: it’s just the [insert team name here] or Dallas had Cooper Rush at quarterback. The excuses go on and on, but the Eagles just keep beating the team in front of them each week.

The #Eagles are as talented and dominant as any team, but I do wish their schedule was more competitive. pic.twitter.com/IN8UO6p2JP

As it stands now, the Eagles won’t play another team above .500 until week 13 against Tennessee and even the Titans will likely be heavy underdogs to the Eagles. And while the Eagles have had some games against bad teams like the Steelers, they’ve been taking care of business and beaten some good teams along the way.

People seem to have forgotten about the dismantling of the Minnesota Vikings in week 2 which still stands as their only loss on the season as they were able to hold Justin Jefferson to just 48 yards. Their win over Dallas seems to have been overlooked despite hanging 26 points with no turnover on one of the best defenses thus far this season.

Coming into each matchup, their opponent has a game plan to be the first team to knock off the unbeaten Eagles and in all seven games, they have gotten punched in the mouth early and had their game plans thrown away as they try and play catch up. The Eagles and Nick Sirianni deserve a lot of credit for that. Eagles teams of the past have fallen into trap games, but this one has not just yet and they’ll have the first test on a short week on Thursday against a bad Texans team. 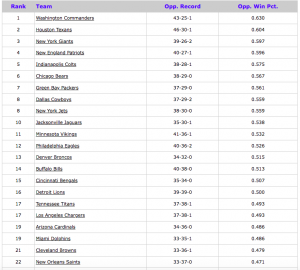 So far the Eagles’ schedule have the 12th hardest in the league above other great teams like the Bills (14th) and the Chiefs (28th) but haven’t been getting nearly the same respect. The Eagles are good and are head and shoulders above a lot of teams this year as the NFL seemingly has fewer good teams than in previous years as many teams have fallen into mediocre territory like the Packers and Buccaneers.

Looking ahead at their schedule after Thursday’s matchup with the Texans, they have the Giants twice, Dallas, Tennessee, and maybe Green Bay (if they get it together) as their toughest remaining opponents. While I’m sure that none of these teams will be considered good wins in the eyes of the national media if the Eagles are to beat them, they just need to keep taking care of business and start to run away with this division and the first seed.

Because no one is going to want to come to Philadelphia in December for the Divisional Round regardless of the Eagles’ “weak schedule”.