The Sixers’ disappointing start to the season has not only brought doubts and worries! With James Harden’s great level of play, it seems like one of the biggest question marks surrounding the Sixers has been answered: our shooting-guard is still amongst the very-best scorers. After his first off-season as a Sixer, the 2018 MVP is finally delivering repeated superstar-like performances. To do-so, James benefits from an healed hamstring but more importantly, he (re)added a major weapon to his arsenal: the mid-range game.

It’s the famous saying that thrummed Daryl Morey and Harden’s Rockets: “Lay-ups And Threes”. The now-reunified duo struck the league and changed the game forever when they based Houston’s entire offensive philosophy on one simple-but-revolutionary concept: reducing the team’s shot-selection to the most efficient shots; the lay-ups and the threes.

Like that, the Rockets were one of the two best offensive teams in the league for consecutive years and Harden was crowned scoring-leader three seasons in a row. But even a former MVP is vulnerable to the unfathomable time, and so is his shiftiness and explosiveness. If it doesn’t seem to be the case at the moment, getting to the rim and creating separation will inevitably become harder for him. That’s why in the first four games of the season, we noticed Harden’s clearly renewed interest in shooting top-of-the-key mid-ranges. 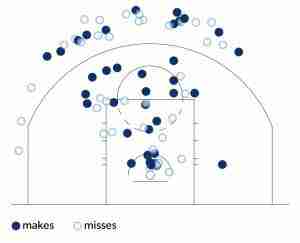 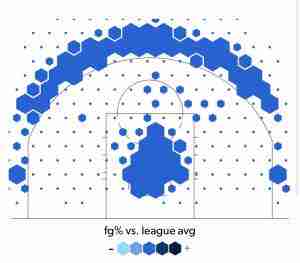 When we look at the disparity in mid-range attempts between Harden’s season shot-chart (on the left) and his career shot-chart (on the right), we perfectly understand to which extent he previously neglected those shots and how this habit is changing. Harden is averaging 3.5 mid-range tries per game (he was only attempting 0.8 per game last year) and he’s netting a blazing 71.4 % of them!

In the past, teams were so scared of his step-back and driving threat that they would literally give him the open 16 footers. Instead of shooting them, Harden often used his touch, strength and overlooked athleticism to attack the rim. He did it with great success, but with his physical attributes soon declining, James had to reinvent a part of his offensive game to last longer and better.

Shooting the mid-ranges allows The Beard to leverage his shooting-threat and passing wizardry to perfection. If teams switch, he can beat the opposing big in isolation and if they switch late or drop, he can go for a pull-up.

If he fails to completely get by his man or if he doesn’t want to settle for the step-back three, hitting the mid-range is the perfect alternative.

Overall, his propensity to constantly take middys will ultimately pull the big out of the paint on pick-and-rolls, leading to more easy baskets for himself, the roll-man and his teammates.

His well-known step back translates brilliantly to the mid-range and it will also make him a more dangerous player attacking close-outs. Along with his finishing, his floaters and 3-point shot-making, this diversification in Harden’s shot-selection reminds us that he’s still a true genius and an outstanding offensive engine.

The Sixers are off to a slow start to their new campaign, but with Harden seemingly looking healthier and more equipped than ever, their championship odds have surely not diminished yet. Nonetheless, they have a lot to work on collectively and they need to redeem themselves, by playing with way more energy and defensive rigor.

How Injuries Changed The Course of The Sixers Season

After an avalanche of injuries deprived them of their stars, the 8-8 Sixers as well as the…